A day's worth of inspiration 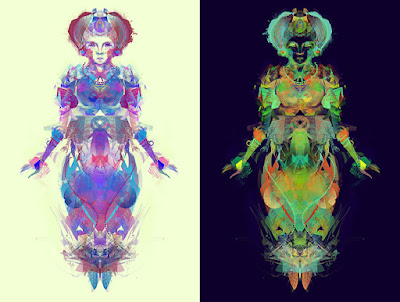 Hey everyone,
Here is a little something I worked on tonight. I came across a site called Mapping Praxis(.com) where they have interviews with famous designers. As I was listening to the what they were saying and looking at their work, I was inspired to create a little something before going to bed. I haven't had time to work on personal stuff this week so I decided to make time for this. I went back to alchemy and started listening to some Ministry of Sound tracks. I worked the program's magic and this image of this funky-indian chick popped out. I fleshed it out in three or four sessions and put it all together in Photoshop. I experimented with the opposite color scheme by hitting command + i and I loved the result so I decided to include it. I could see this working as a CD cover or something (food for thought). Hope you like it. I will also be attaching some video of how it was made so stay tuned. Later.
Posted by Arturo Aguirre at 11:08 PM