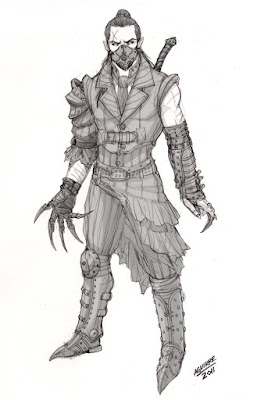 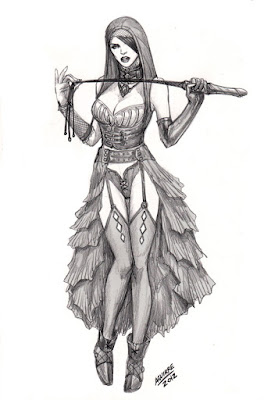 This is my first post for 2012. I wanted to share the last sketch I did last year and the one I did last night. The last sketch is one of a dark elf type character that I wanted to do. I was watching The Fellowship of the Ring as I did this one. I also was looking at reference of clothing. I found that a great source of inspiration is the works of Skingraft. They do these intricate works with leather so if you want to do some badass leather jacket or pants, then you should check them out. I did the sketch on bristol paper with a 4B pencil. I have been working in pencil more because I haven't done many sketches traditionally. It is a pain sometimes but the satisfaction is pretty great once the sketch is finished. The second character is one that I developed for this story I am working on. It's called Jackie Giant Killer. This is the human version of one of the giants. This one took about 3 hours to develop with the pose studies, the thumbnails, and overall design. I used the same tools as the last sketch. I added a multiply layer with a low opacity to create more contrast between the clothing and the skin. Hope you like it. I will work on a color version soon.

Posted by Arturo Aguirre at 9:26 AM